Energy Level: High
Training Goals: Marvin will need mandatory training sessions booked in with a WAG approved trainer. Gaining confidence in new places, learning polite introductions with other dogs, basic manners
House trained? Yes
Kids? No
Cats? No
Dogs? I would like to be the only dog in the house and can get excited when I see dogs on walks. I get along only with some dogs and in the right situations.
Medical Needs: Anxiety medication

-Has a safe a secure fenced yard. I may never be a candidate for being off leash or going to public parks and dog parks as I get overwhelmed easily.

-Is willing to take a few trips to WAG to get to know me before taking me home. I am fearful of strangers when I first meet them.

-Has experience with fearful dogs. My reactions to my fears can include trying to run away (I am very strong!) or flattening myself to the ground and not wanting to move!

-Has lots of patience and understanding of my past - I did not develvope in a normal environment so my needs are different than your average dog.

-Loves goofy loveable quirky boys. I am so much fun to play with when I feel safe and can be off leash in a secure area. I love to play fetch and tug-of-war and soccer, and have lots of energy!

-Will continue with my training and keep me on leash. My training needs will be more about confidence building and creating positive associations rather than basic commands.

-Will buy me a GPS tracker that I must wear on walks to keep me safe! I am a flight risk so this is a requirment.

-Will love me forever no matter what!

-I LOVE to play with any ball of any size!
-I love to swim, any time of the year, but I do need a life jacket 🙂
-I am very busy but am learning to relax with the help of medication.
-I am very shy meeting new people, you may need to meet me a few times before we are friends.
-I am still nervous going on walks and would like a quiet yard in my new home.
-I need lots of gentle training.
-I am nervous of loud noises and new things and will need someone who is patient with me.
-I have never lived in a home before.
- I need a family that is okay with the fact that there will be some situations I won't ever enjoy

Marvin has been in a foster home for the last few months, this is what his foster dad has to say!

The World According to Marv

The wonderful girls at Wag have asked me to put down a few words to give some insight as to how Marvin has been doing the few months outside the Shelter. I have had the privilege of spending a great deal of time with Marv over the last several months. At first just taking him for hikes, walks, swims and other adventures. I have been fostering him for several weeks now being together pretty much 24 / 7 together. When I first thought of trying to have him stay with me it was a bit of a slow start as he was very scared to even come inside where I live. It took many visits just to hang out on the decks and the back yard with the door open before he was curious enough to try to come inside. I did not know it at the time but found out that he had not really ever been inside any where other than the Shelter. Taking our time and more visits he finally mustered the courage to come inside. The first few times inside he was extremely anxious but slowly became more comfortable and we decided to try a few sleep overs. The first ones were honestly pretty intense at times as there were so many new things that were foreign and scary to Marv. The kitchen was a no-go zone for a while even though that is where I feed him and pay extra attention with treats and encouraging him to smell things that were making him anxious. The fridge door and the recycle bin can at times still be a little tough for him.

Over the last several weeks Marvin has made so much progress in so many ways. Noises of all kinds can be very scary to him. In the beginning he had trouble getting used to surround sound while the TV was on, old hat now it does not bother him at all. Music was also something that he wasn’t used to, he is getting more comfortable with it. I play several instruments so it was important that I at least attempt to see if he could get over this fear. Right off the bat he was intrigued by harmonicas, he loves the sound and reacts happily when I play. He is slowly getting more used to guitars, again at first the sound and the action of playing made him uncomfortable. Other noises like washing dishes, the oven door and other back ground noises are things that bother him less and less now. He is also starting to see the vacuum as a necessary piece of equipment, sweeping the floors he choses mostly to leave the room. Marvin continues to relax and settle in so many situations way more quickly where he would have had trouble before which is truly such a great thing to experience. He was a bit of a bed hog at first but now understands that vertical is the way to go…not horizontal. He has learned to tone down the level of play while inside. He has adapted to going to the same area to go to the bathroom and has also settled in on a regular schedule. Most mornings are a really fun experience, some days he wakes up so happy &amp; the lick and love fest is on! Other days he is a bit of a lazy bones and chooses to sleep long after I get up. He is still striving to be a lap dog &amp; loves to lay on top of me…don’t think he knows he is a little on the heavy side. He can still get really excited when gearing up to leave with his harness and leash but he is trying hard and working on it. Coming home is a breeze, he will sit immediately coming inside to remove his harness and leash. He also now lets me dry him off with a towel on rain days, took some getting used to but he is good with it…including his paws. He is also OK with a tea towel under his chin covering his front legs /paws as a napkin while I eat meals…Marv can be a bit of a slobber guy at times so this is a good thing.

Marvin is also a great work assistant. He is totally happy to chill when I have to spend computer time and when it is time to go out on the road, he absolutely loves it. He has adopted the back seat of my vehicle as a comfort zone, he was at first panting and pacing often when I had stops on my work day. Now he is almost always laying down and chilled out when I get back from a stop. He so looks forward to going out to do the work runs. We have also been working hard on adventures outside his comfort zone. Again it has taken a while but he is getting more and more used to going to places like Spruce Grove, Meadow Park and other places where there is a lot going on. He still prefers the hikes in out of the way places but is making huge strides where there are people and other dogs. He has met a number of other dogs including a puppy that lives next door with great success, he does get excited but his body language says he really loves these experiences and am continuing to explore these great encounters. I feel very fortunate to have the chance to spend so much time with Marv. He is an extremely loving, incredibly smart puppy that is trying so hard to please. He at times is still learning how to figure that out but his victories are more and more frequent and his confidence levels are growing daily. Getting him outside his comfort zones slowly are really starting to let him come out of his shell…extremely rewarding thing to be a part of.

Every day is a new one in so many ways with Marv, love him to bits and then some !

I was surrendered to WAG after my previous family could no longer take care of me. I was left outside a lot, my owners no longer had the time for me. I hope to find an amazing new home that is excited to have me as a member of the family! 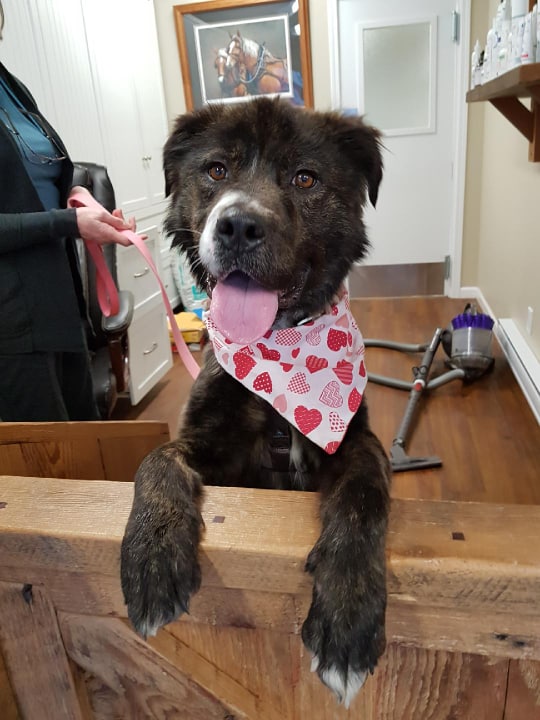