Rolo was surrendered to WAG in August 2014, this boy was full of energy and love, it wasn’t long before he found his forever family. They’ve had a pretty amazing year by the sound of it,

“What a handsome dog you got there”

Well our Rolo is all of the above but he’s also more than that. Just like Kai, one of Rolo’s people – Rolo has a happy and playfull personality. He will run and chase the ball until he flops down exhausted, unless there are dogs to run and play with down at the Kits dog beach. Not only that, but he loves to chase the ball diving high over the first breaking wave, to the delight of all the dog owners, and then will swim after the drifting ball even while the shakes and shivers over-take him. Time at the dog beach is also his reward for sitting for most of two hours in the stern of my 78 year old rowboat! Every so often in the middle of Burrard Inlet as he gets splashed he will turn and search that distant shoreline in the direction of the dog beach – and I can just about hear him ask   “oh come-on,  -when we are heading back there? Please…”

In fact Rolo is becoming a really good boat dog.. Since he joined us as a puppy with his floppy ears, he has spent time with me on boats.  Rolo has lived a good part of his year and half with me on Stella my 36’ sailboat. The 5 hour sail across the Strait has never been a problem – as he’s been able to hold his need to relieve himself and would split his time between sleeping below or wedged into a corner of the cockpit.   When the healing or bouncing boat is a bit much for him he prefers to be nestled down below lying next to his toy (Rolo’s rooster!).  Summer on the boat means lots of swimming time, chasing sticks and riding on the SUP or open kayak with Carole or Kai. When Rolo watched the kids in the bay jumping off the  SUP like a little float, playfully wrestling and hooting and laughing,  he just couldn’t stand it and had to go to the rescue!  He swam all the way out there, towing the SUP with the kids on it all the way into shore, undeterred by  their demands to stop!

Like many high-energy dogs and people, once Rolo settles down he really  really likes to relax. Clearly he understands that when he lays on his back and splays his legs wide, his exposed tummy will get rubbed sooner or later. He’s also learnt that opportunities for sleep come at different times of the day – sometimes while in the crate on the airplane to Prince Rupert or Haida Gwaii.  Rolo should be collecting travel points as he’s now made that round trip many times but he knows that there’s always something good and fun to do at the other end of the noisy plane ride; walks, his ‘people’ , afternoons at the office, the Rupert house, big deer in his yard, etc.

Rolo has lots of attention in his short life, regular fun times and frequent changes of scenery with new things to experience. Meanwhile, – we, Rolo’s people,  get to appreciate his happiness and love! 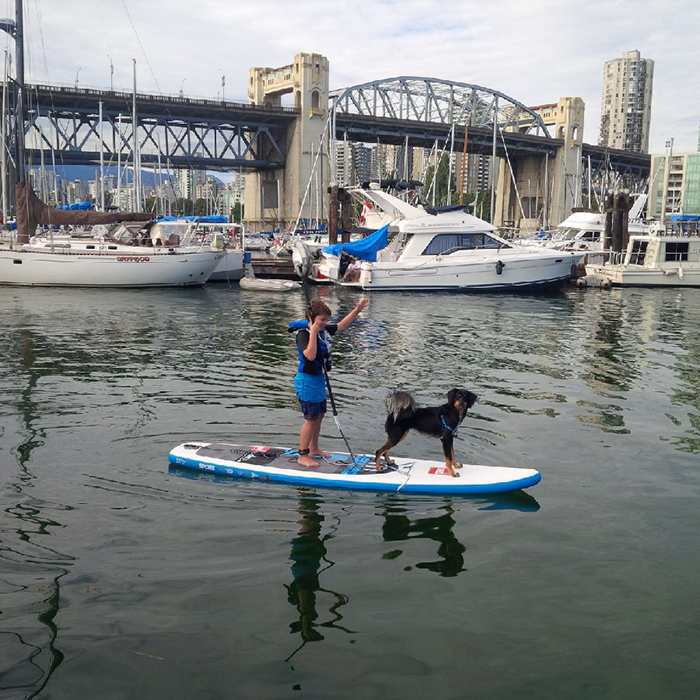