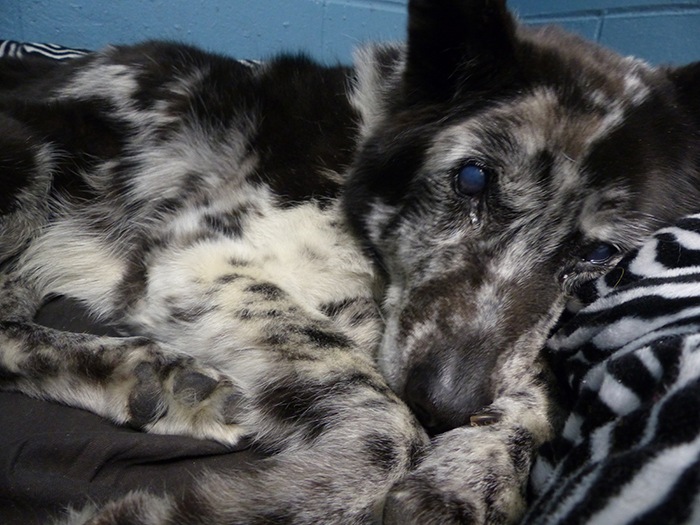 Sable was found in a snowy ditch, so weak and blind that she was unable to pull herself out. Thankfully a wonderful man climbed down and rescued her, carrying her to the warmth and safety of his car.

When she arrived at Pemberton Veterinary, it was very clear that this senior lady was in bad shape. She was emaciated, stumbling, and almost completely blind and deaf. She received IV fluids, good food, and her blood was taken for analysis, where it was revealed she had kidney disease. The doctors, technicians, WAG staff, and volunteers were hopeful that help had come early enough to save her life. For the next few days, she seemed to improve, wagging her tail and occasionally barking at nothing in particular. Despite a wide variety of delicious food choices, such as roast beef, chicken, and hot dogs, Sable did not have much of an appetite, returning to the hospital to receive more IV fluids before going into a foster home. Despite the best care, food, and medication, Sable never re-gained her appetite and gradually became weaker until the tough decision was made to say good bye.

Though we are devastated that she could not be saved, we are so relieved that she was able to spend her last days surrounded by warmth, proper care, and love.

Please consider donating to WAG’s Critical Care Fund and help more animals like Sable get the care they desperately need.